As babies grow older and become more alert, they become increasingly interested in their surroundings. At around 6 months, Allie became more interested in the things around her than in feeding. Catching up on shows while breastfeeding became no longer possible =(. Allie became as interested in watching Big Bang Theory as I did. Some recommend covering the baby to prevent the outside stimulation but that didn’t work for us. She easily moved the cover out of her way. Feeding in a quiet, dark place helped. She was still interested at night but it was a struggle if something was going on around her. Also, it was not fun for the nipples as she tried to pull on them when turning her head. 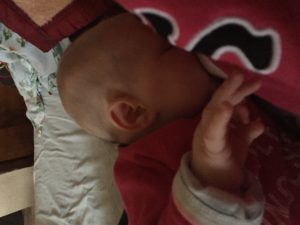