Week one: “My milk is not coming in.”

My baby girl was born breech. We discovered that she was breech at 32 weeks of pregnancy and despite my consistent attempts at doing the exercises I found online, she did not turn. She did wait until 39 weeks, which is when she was delivered via scheduled C-section. There are reasons we did not try an inversion and I decided not to deliver vaginally but I won’t go into it because this blog is not about that, it’s about breastfeeding.

Delivering a baby via C-section often causes delay in milk production because the body isn’t ready for or aware of delivery and it needs to catch up. I knew this all quiet well. I thought I was ready to face the weight loss and baby hunger that comes with it … but I had no idea how difficult it will be.

On day 1, I tried my best. I put my baby girl to the breast as much as possible and as much as she wanted. In between those times, I hand expressed drops of colostrum (it would take me up to 20 minutes to express about 5 milliliters of colostrum — and it was a two-person job.) I also tried pumping but it was extremely painful because my nipples were too large, even for the largest phalange. Thankfully, the hospital had lanolin cream, which I was able to apply to the rim of the phalange to reduce friction which helped with the pumping pain.

However, on night 2, still with no milk in sight, almost 10% weight loss, and a baby who wouldn’t stop crying, I broke down. I felt terrible because I felt that I was starving her and I sent my husband to get formula. She took only 20 cc of formula but it was enough for her. She became calm and fell asleep.

Every day I would get slightly more milk. On day 3, I pumped nearly 20 cc of beautiful orange colostrum. I was so happy and proud. My husband, Max, and I were working as a team and I felt great that would finally be able to feed Allison something. Max was transferring the milk from one container to another when he decided to comment how funny it would be if he accidentally spilled the milk. Before I had a chance to imagine this, I was interrupted by an orange puddle on the floor. He lost the grip of the container and spilled about half the milk. I knew he felt awful about it and I will definitely tell this story to Allison but sometimes, all you can do is laugh. 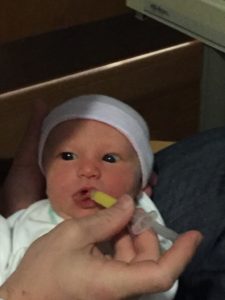 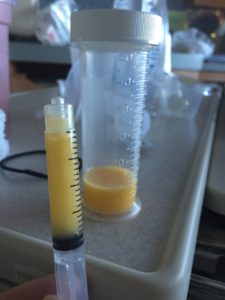 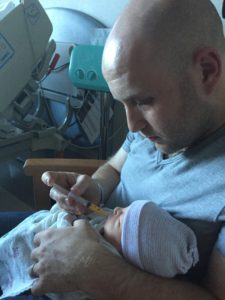